You better believe it! 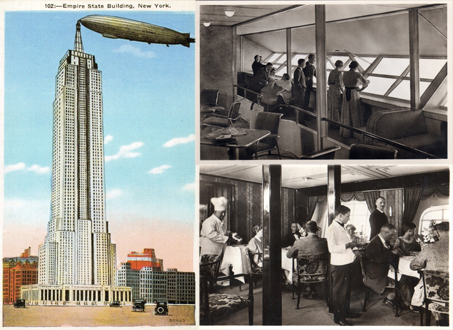 With summer here and people crossing the oceans as if it isn’t a big deal, it occurred to me to dedicate this post to a way of transportation almost forgotten and its link to one of the most recognizable icons of  American architecture anywhere.

The 1930s were certainly awhile back, yet some of us either know of somebody that lived during that time or have seen period photos and therefore know that life was pretty much as it is today… no powder wigs or painted moles!  So it was a real surprise to discover an interesting fact about transatlantic travel in the third decade of the 20th century.

The height of modern transportation in the 1930s were the innovative airships (zeppelins).  These cut the transatlantic crossing to 2 days compared with the normal ocean crossing of 6.  Even well into the 1950s, aeroplanes could not make the flight from New York to London without stopping in Newfoundland for refueling, so to fly from London or Paris DIRECTLY to New York or Rio de Janeiro in the 1930s was truly a marvel in itself! Think of the blimps as a much stylish version of the Concorde.

These airships were over 800 ft.  | 244 m. long (over two football fields!) and included a dining room, lounge, library, bar, and smoking room (!!!) along with cabins for 50-75 very rich passengers and another 40 to 60 crew members.  The balloon was also filled with hydrogen, a very, very, very flammable gas.
The EmpireStateBuilding opened in 1931 and few people realize the building was also designed as the terminus for the new transatlantic airships.  What strikes us now is how completely unsafe and impractical it would have been to board or deboard the zeppelin from the very tippy top of the EmpireState … all 1200 ft. | 363 m. above the streets of Manhattan!  Talk about “minding the gap”!
The strong and unpredictable wind currents from New York’s avenues made moorings impossible, so it was decided to move the landing and departure of the blimps to Lakehurst, New Jersey where on 6 May 1937 the most famous of the zeppelins, the Hindenburg, exploded into flames.  This catastrophe was the beginning of the end for the zeppelin, replaced years thereafter with the jetplane.