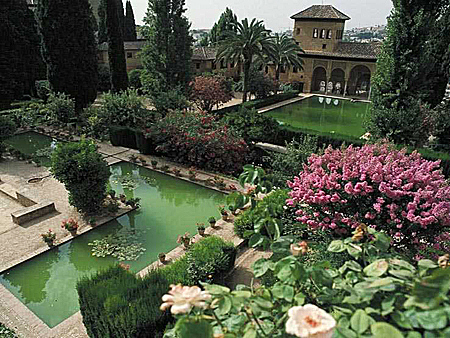 The Palace and fortress complex of the Alhambra in Granada, Spain was constructed over 660 years ago for the last Muslim emir of Spain and his court.  It was re-discovered in the 19th century and has since been restored to its former grandeur and beauty.

Pictured above are the gardens of the Generalife, the summer palace of the ruler which sits just outside the Alhambra fortress, but still within the RoyalPark.  It is particularly enjoyable for its cool, green, terraced water gardens that serve as a respite from the Andalusian heat.  The flower beds framing the pools and dripping with flowers also serve to attract birds of song, which combined with the water canals and fountains throughout the gardens and courtyards transport you to a storybook place and time.
image credit: Richard Rabel
August 24, 2011
-->