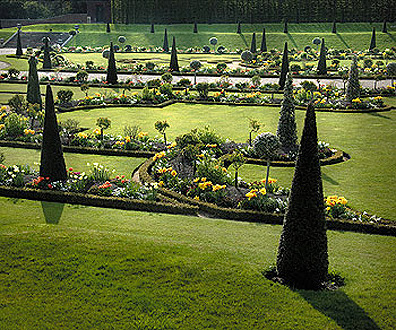 Founded in the 15th century by Henry IV, Hampton Court Palace went through the hands of The Order of Saint John of Jerusalem and Thomas Wolsey, Minister and favorite of Henry VIII, before it was finally given to the King by Wolsey as a gift.  The Privy Garden (photographed above) was always the private garden of the King and his close circle right up until the early 20th century.

What we see today is the early 18th century garden layout, restored meticulously using written accounts by the gardeners who planted it for William III.  Under normal circumstances detailed accounts like these would not exist but as the King died before they were completed in 1702, the gardeners and workmen submitted extra-minute accounts for fear they would not get paid (and apparently they still did not get compensated in full!!!).
The beauty of this garden is in its geometry, a type of garden that fell out of taste in England soon after it was completed. Thereafter, the hickely pickely disarrayed but enchanting garden that we now identify as English gained favor.
image credit © Historic Royal Palaces | Photography: Steve Bicknell
August 22, 2011
-->