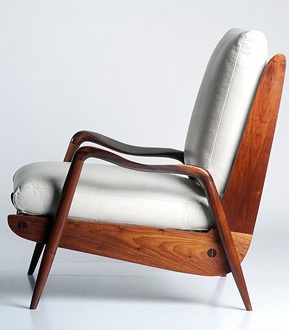 Phillip Lloyd Powell (1919-2008) was a little known American furniture maker who frankly needs better PR!  His work is beautiful and modern, and it’s a shame he isn’t nearly as well known as his close American “studio movement” contemporaries Paul Evans and George Nakashima.
Powell grew up outside of Philadelphia, a city rich in artistic heritage as home to several great institutions that helped foster and nourish great craftsmen.  The Pennsylvania Academy of Fine Art was founded in 1805 and is the nation’s oldest art school and museum.  Coupled with a large group of wealthy patrons devoted to their hometown talent, it was the ideal place for a young furniture maker to develop his craft.  Having begun building furniture for family and friends in his teens, Powell studied engineering before joining the Army Air Corps in the Second World War. 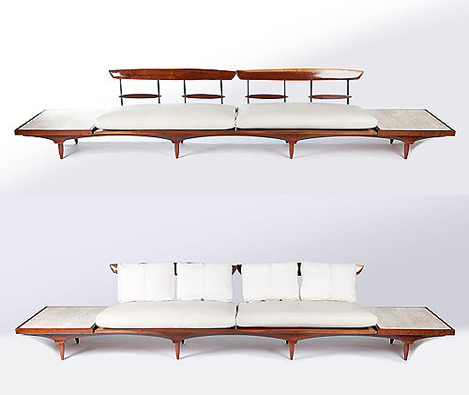 Having so many artists working around the area made it easy for Powell to bounce ideas off his colleagues. He often used woods rejected by Nakashima’s studio in his own work.  Like the chair and bench shown here, you can see the influences of the mid 20th century, but Powell hand carved and finished each piece, allowing for nature to dictate their character.
The elegant lines of the long bench lift and banish all traces of weightiness. The elegant twisting armrest of his chair is another example of the incredible attention to detail and fine workmanship.  There is a sense of flow associated with Powell’s pieces that reject the more stark lines of some of his contemporary furniture designers. 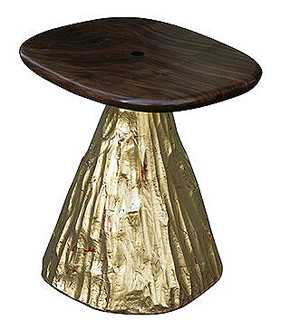 Powell also took atypical finishes and used them with perfection in his furniture.  Silver bracelets became handles on a commode; deer antlers became part of a teacart; and cabinet interiors use gold leaf as a backdrop to the natural wood finishes.  The side table in this post is a good example in that it shows the contrast between the natural wood top and its gilded base.
In his 50 years of output, including a 10-year partnership with Paul Evans, it is thought that he created fewer than 1000 pieces with his own hands – about 10% of the output of Nakashima’s studio.  So watch for pieces by Phillip Lloyd Powell in 20th century auctions.  They could just be the vehicles for your retirement in 30-40 years.