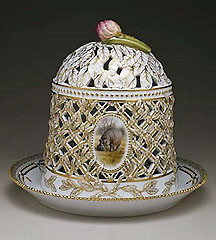 From the 1700s to the early 19th century, specially commissioned sets of porcelain were the norm for the tables of Europe’s upper crust.  Huge services could be ordered from China and hand painted with exotic scenes topped with your family coat of arms. 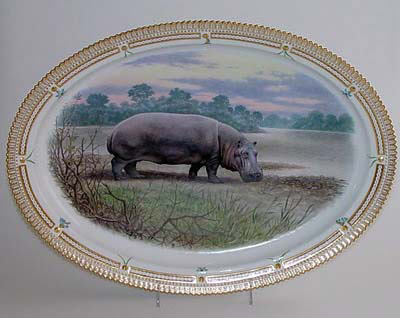 As Europeans started their own porcelain factories in the 18th century, it became much easier to commission services from France’s Sevres, Germany’s Meissen or England’s Minton’s.  European Royals and aristos often vied to outdo one another by commissioning extensive services painted with unique scenes of their homes, castles and gardens. 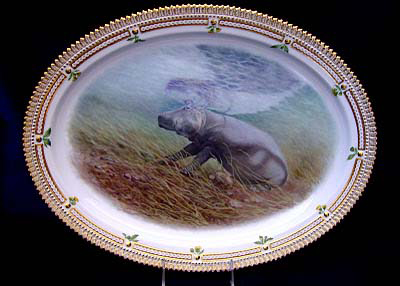 But this was never an inexpensive venture and as mass produced services became available to the middle classes, people stopped commissioning these unique services.
After over 100 years of not receiving a service commission, the Danish porcelain firm Royal Copenhagen got a commission for over 150 pieces from American businessman Richard Baron Cohen … something unheard of in modern times.  While the cost of the service has never been revealed it is rumored to have cost around US$400,000! 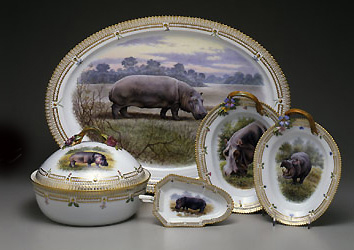 This service is unique to the history of porcelain production, as each piece depicts a hippopotamus!  The Hippopotamus Service illustrates over 300 hippos as photographed in 101 zoos and countries around the world and is painted on the blanks of Royal Copenhagen’s most famous pattern, Flora Danica.  The service was such a curious success that the owner and the factory agreed to have it tour Europe and the U.S.
Next up, Mr. Baron Cohen has commissioned the 237-year old Royal Copenhagen to create over 3000 pieces of Flora Danica with grasses, seaweeds and fungi drawn from the factory archives which have never been used.  I wonder what he is planning for his third commission?
image credits: Richard Baron Cohen.  Re-print.  First published 16-02-2012 as a contributing feature to another blog.
To go to the blog’s HOME page click here
click here to “like” me on Facebook
July 6, 2012
-->