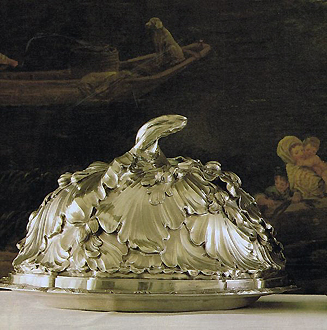 Happy New Year 2012.  May it bring you happiness and health and the time to enjoy it all!As the year starts, I’ve fallen in love with yet another piece of exceptional French silver!  It happens quite often actually, but this time it is a stunning 18th century silver-gilt covered dish, and not the modern Art Deco silver I normally fall for.

Look at this splendid bijoux !!! … it has the appearance of a golden pile of autumn leaves.  It is so meticulously and masterfully realistic in its detailing, that it is no wonder its maker, the great Thomas Germain, was silversmith to the courts of Louis XIV and Louis XV.  He makes the silver come to life, playfully making it appear like a breeze could come into the dining room window and scatter the leaves all over the table.   This is not only fit for a “traditional” interior but just imagine how stunning this piece would appear on a contemporary dining table, surrounded by minimalist shapes and unassuming colors.  Life is truly better for having such fabulous objects.

French silver of this period is rare – it was like cash in a world where banks could seldom be trusted to keep your money safe, so wealthy patrons put their money into silver which could be used on a rainy day as well as be formidably displayed to impress the Joneses.  Louis XIV had suites of furniture made of silver; life at Versailles was just that grand.  But sadly war and revolution meant that the majority of French 18th century silver was lost to the melting pot.  Unlike in England where peace and a thriving middle and upper class ensured the survival of mountains of 18th century English silver, the French had no such luck.
So when I see French 18th century or earlier silver, I can’t help but think of how lucky we are that it still survives for us to admire and to own.  A link with the past that history didn’t completely erase.
image credit: via trouvais
To go to the blog’s HOME page click here
January 2, 2012
-->