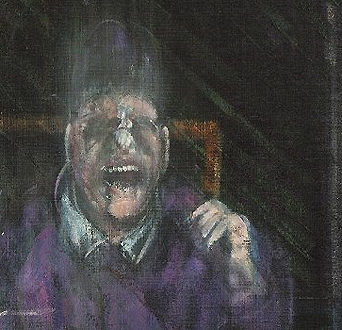 Pictures of Popes and Cardinals can be a difficult sell.  While these were prevalent in the centuries prior to the 20th, I wouldn’t say they are popular with today’s artists or art-buying crowd.  So what’s all the fuss about a painting after Velazquez’s Pope Innocent X in the upcoming Contemporary sale at Sotheby’s New York?

Well, it just so happens that this painting is part of the famed series by Francis Bacon done in the 1950s as a response to the horrors of World War II.  (Think of it as Bacon’s version of Picasso’s Guernica or Goya’s Disasters of War).  This particular image is one of eight, “Studies for Portraits”, created by Bacon for his first international show in New York.  The series takes the image of allegedly the most sedate and respectable figure in “Christendom” and juxtaposes chaos and disharmony to create this hauntingly disturbing portrait.  The pontiff screams for the sins of humanity and yet no one hears his anguish and pain.  His suffering – our suffering – leaves us with discomfort, not necessarily what one usually takes away from a mega-million dollar portrait. Bacon was fascinated with Diego Velazquez’s image, and yet he had not seen the image in person when he did this painting; he worked only from photographs of the original with the Doria Pamphilj family in Rome.  The image he created emits the violence and uncertainty that Bacon carried through his life – having been English, but growing up in an Ireland he was not welcome in, and then in a Germany awakening to the era of Hitler.  Later, the brutal deaths of his lovers would only reinforce this aura of pain and suffering.
An iconic image of post-war art, Francis Bacon’s anguished Pope Innocent X has been in the same private collection since 1975 and has not been seen in public since.  So when blue chip artist meets iconic image meets fresh to the market?  Well, we’ll just have to wait and see what happens on November 13.  I’m confident it will find a deserving home!
image credit: Sotheby’s. Lot 26.  Francis Bacon, Untitled (Pope), circa 1954.  Estimate: US$18,000,000 – 25,000,000.  The painting is to be offered in the Contemporary Evening Sale in New York on 13 November 2012.  It will be on view to the general public at Sotheby’s NY from 9 – 13 November 2012.
~~~~~~~~~~~~~~~~~~~~~~~~~~~~~~~~~~~~~~~~~
Note – The brains behind Modenus are running a feature on their website to select the Top 100 International Interior Design Blogs including, ahem, ahem … The Modern Sybarite.Check out the evolving list and if the urge to vote strikes you, a “Thumbs UP” for the Sybarite would be MOST welcome and appreciated. To see the list, click here.
November 8, 2012
-->