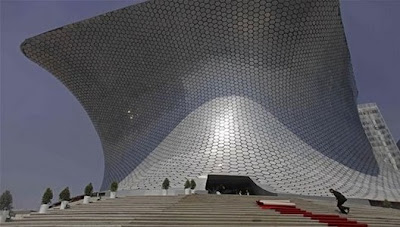 It is rare to see super cool yet functional architecture in Latin America, but all that is changing.  In March Mexican billionaire Carlos Slim opened his museum in Mexico City. All six rooms will exhibit a rotating selection of pieces from his huge and eclectic collection.  I have not seen the building in person, but from photos, it looks like the building itself could be the greatest asset.  The anvil-shaped structure, designed by Fernando Romero who studied under über Dutch architect Rem Koolhaas at Harvard, is covered with thousands of hexagonal aluminum panels that reflect the inviting Mexican sunlight.