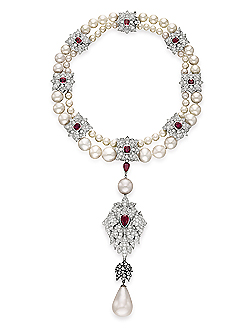 In the jewelry world, certain stones and gems are so unique and preciously rare that they are known by name … the Hope Diamond, the Star of Africa, and La Peregrina.
La Peregrina, Spanish for “the wanderer”, … oh the places this pearl has been!  Found by an African slave in Panama in the 1550s, the colony’s Spanish governor awarded the lucky finder his freedom and then quickly gave the pearl to King Phillip II of Spain to present to his first bride Mary Tudor of England.  After Queen Mary’s death in London in 1558, the remarkable pearl was returned to the Spanish Crown where it was enjoyed by Spanish consorts for the next 250 years.  With Napoleon’s invasion of Spain in 1808, the coveted La Peregrina passed into the hands of his brother Joseph who was crowned King of Spain.  After the defeat of the French the pearl went into exile with Bonaparte until he pawned it to the Duke of Abercorn who in 1969 sold it at Sotheby’s to Richard Burton for the princely sum of $37,000.  And since Valentine’s Day 1969, it graced the elegant neck of Elizabeth Taylor who had the pearl set by Cartier into a truly magnificent setting of flawless diamonds and electrifying rubies.

It’s frankly outright amazing one can trace the history of this marvelous jewel for almost 500 years without a break.  Owned by European royals and  Hollywood royalty, the pedigree doesn’t get much better than this.   Christie’s will sell the pearl in its impossibly elegant current necklace setting along with other impressive jewelry owned by Elizabeth Taylor.  And so on the night of December 13th, “the wanderer” will once again move on to grace the neck of another lucky lady.