Dinner Bling in the Age of Napoleon 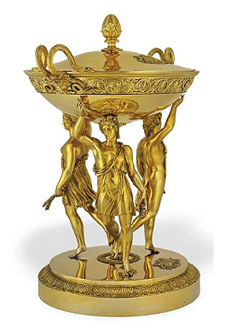 France has always been known for its chic and refined taste in art and design but back in the 19th Century, it had no other rivals.  At the turn of the 19th Century, even while most of Europe was at war with Napoleon’s France, the aristocracy of Europe looked to Paris to define what was chic in dress, manners, and of course, dining.

French aristo dining tables of the Napoleonic era literally dripped with gold and silver.  Tureens, entree dishes, centerpieces, candelabra, dinner plates and flatware all glittered in the candle light creating a magnificent back drop for the delicious excesses of the time.  The very best of art and design of the period incorporated classical forms and these reflected the good taste and worldliness of the owners. Silversmiths from London to Vienna to St. Petersburg took up the mantel of neo-classicism, copying everything their clients saw in the palaces of France. 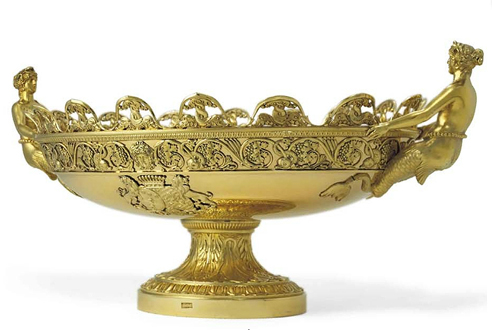 The dinner service above is a perfect example.  Odiot, silversmiths to Napoleon (and still producing today!), created a service for Count Nikolai Demidoff, a Russian nobleman whose love of Paris led him to almost abandon his native Russia.  The centerpiece of this service is the figural tureen above that stands two feet tall (60 cm.) and weighs 34 lbs. (15.5 kilos) of solid silver.  The entire service had over 60 pieces, so imagine how impressive it would have been to have dinner at the Demidoffs!!!!
With the passing of time and the reversal of fortunes, the service was broken up and sold as single pieces, each standing as individual testaments to chic 19th century France.
image credits: © Christie’s.  Re-print. First published 20-9-2011 as a contributing feature to another blog.
To go to the blog’s HOME page click here
click here to “like” me on Facebook
July 2, 2012
-->