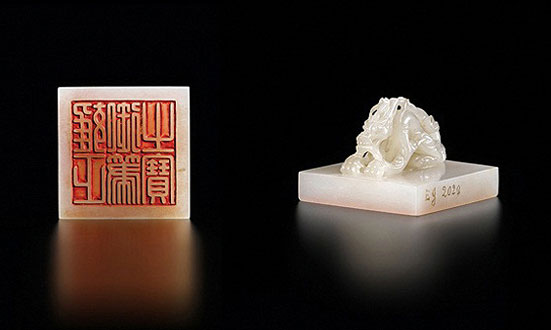 Now and again I write about art which is not necessarily modern looking or made, but art that captivates the fascination of today’s contemporary collector.
Just like their counterparts in Europe, the Chinese used seals to, well, seal letters and documents.  While in Europe these seals were made from gems, carved ivory and wood, the preference in China was jade, and when the seal was made for the Emperor Yongzheng (ruled 1723-1735), only the finest white jades would suit.
Research tells us that the emperor commissioned some 253 imperial seals, of which only  FIVE were made of jade – the others were made of ivory, porcelain and other hardstones.  Today most all these seals are part of the collection of the Beijing Palace Museum where they are not expected to go up for sale any time soon!
The provenance of this beautiful and most rare of jade seals becomes of utmost importance:  there is not only a link to the 18th century, but also to the
Imperial Court

.  It doesn’t get much better than this!  Provenance always helps prices, but especially with Chinese art, knowing the dealer or collection the piece was once part of can do wonders for a price.  And thus, this precious little gem of a seal sold at Sotheby’s Hong Kongon October 5th 2011 for over US$4,500,000.  Perhaps it is joining others on display in the PalaceMuseum, or could it be sitting on the bedside table of a billionaire collector … we will perhaps never know.