bowled over by emile decour 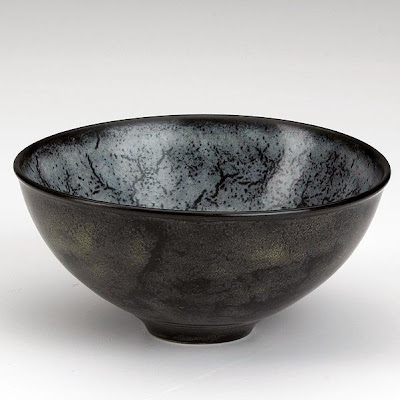 Although everything is now online, I admit that I still like leafing through an auction catalogue just on the chance that something I would have clicked past online will “speak” to me from the page.
While going through the Rago Auctioneers of New Jersey 20th/21st Century Design Auction catalogue of late February, I came across a page with ceramics by a French artist that was not known to me and whom I otherwise might have missed.  Emile Decour (1876-1953) originally took inspiration from Art Nouveau and then worked through the next decades of the century to create more modern and sleek forms.  His earlier works would not have inspired me – I’m not into the organic forms of that period- but I love the simplicity of this bowl and you can clearly see the influences of a resurgent Art Deco inspired Orientalism.  The form and glazes of this bowl could equally place its origin in Japan as much as France.
I love this piece.  It would be a brilliant addition to a sleek contemporary space.  It is tiny and jewel-like and needs nothing to accompany it when placed on a side table or shelf.  And I’m so glad to have discovered yet another French Art Deco master.
image credits: © Rago. Lot 431, Emile Decoeur, stoneware vase, mauve and black glaze, France, late 1920s.  Estimate: $1,200-1,500. Sold in the 20th Century Design Auction, 25 February 2012.
to go to the blog’s HOME page click here
click here to “like” me on Facebook