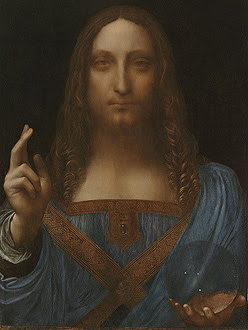 In the field of Old Master Paintings, where the artists have long passed, the pleasure of the old master connoisseur is reserved for the discovery of new works in the body of an artist, particularly a blue chip artist.  But more often than not, the discoveries splashed over the newspapers or made-for-rating television programs are figments of people’s imagination. But once in a blue moon, a colossal discovery is made.
Leonardo da Vinci’s “Salvator Mundi” was rediscovered by two of the nicest people in the field, New York-based art historian and dealer Robert Simon and private dealer Alex Parish.  To accentuate the importance of this, you should know there are only about 15 oils known to be by the hand of the Master … so this discovery is a very BIG thing. Known only from an etching, it was assumed lost until it turned up in an American collection.

How can a painting be lost for 500 years? The painting once belonged to King Charles I in the 17th century and in 1688 went to the Duke of Buckingham where in 1763 it was sold by his descendants as a Leonardo. The painting then disappeared and resurfaced in 1900 attributed to a Follower of da Vinci when it was bought by British art connoisseur Sir Francis Cook. The painting was sold by Cook’s descendants at Sotheby’s in 1958 as a Follower of Leonardo and during the remainder of the 20th century was part of an American collection as a Follower of da Vinci up until its sale in 2005 to the present owner.

After an extensive and expensive program of restoration and years of research and consults with numerous well regarded scholars, the present consensus is that Salvator Mundi is by the hand of Leonardo da Vinci.  So much so, that the National Gallery in London has included it in its show Leonardo da Vinci, Painter at the Court of Milan  9 November 2011 – 5 February 2012.