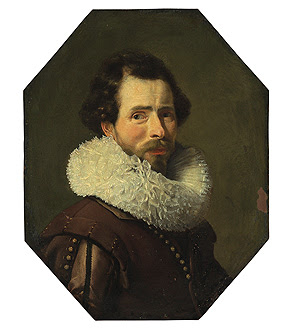 A painter is normally faced with deciding what medium to use.  Today there are countless mediums, but in the early 17th century, only a few were acceptable to the rich collecting patrons: panel, canvas, copper and perhaps slate.  Of these, copper has the highest molecular density and is therefore the less porous of the surfaces allowing the artist to paint jewel-like compositions.
One such magnificent example is the present virtuoso portrait of an unknown gentleman by Thomas de Keyser, a contemporary of Rembrandt, which was on offer at Christie’s New York during Old Master week in January.  What is remarkable about this painting is that being on copper, the artist was able to meticulously render the sitter’s hair, model his imperfect skin and better yet, to depict the layer upon layer of volumetric fabric on that fabulous collar ruff, so common with the Dutch dandies in 1620.

Lucky for us in the U.S., the painting was bought by the Lee and Juliet Folger Fund for the National Gallery, Washington.