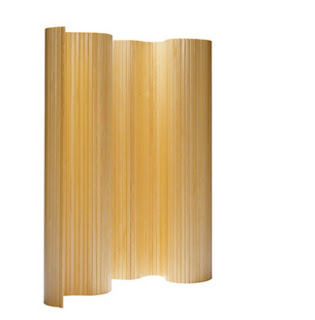 When we think of Scandinavian design, we often think of the Danes or Swedes.  Even I fall into this trap.  But let’s not forget the extraordinary Finns.  Famed Finnish architect and designer Alvar Aalto (1898-1976) was the early 20th century grand-daddy of design as a “totality” … from designing the building, to the interiors including the surfaces, furniture, lamps and accessories, much like the designers and architects of the Renaissance and much like today’s Peter Marino.

Artek was founded in 1935 by Alvar and Aina Aalto, Maire Gullichsen and Nils-Gustav Hahl with the idea of selling their designs.  Today, the company still produces Aalto’s pieces as well as products from other renowned architects and designers, including Ilmari Tapiovaara, Aero Aarnio and Enzo Mari.

One of my very favorite pieces of early 20th century Scandinavian furniture design (and still produced by Artek) is the natural, lacquered and rollable pine screen designed by Alvar Aalto in 1936.  It stands 59in. | 150cm. tall and is 79in. | 200 cm. in length.  The curvaceous body of the screen relaxes the room it sits in, creating a simple and more inviting space.  Today a vintage piece at auction should cost anywhere between US$10,000-20,000 but presumably you can get a certified re-issued piece from Artek for less.  Did you ever think a screen could be this sexy?
July 21, 2011
-->